I have a Lenovo Thinkpad t460p laptop that currently runs Ubuntu 17.04. In general the system is a pleasure to use but one niggle has been mildly infuriating… the touchpad regularly engages when I’m typing and my cursor jumps to an unwanted position mid-word. It doesn’t happen frequently enough to be a serious problem, but it does happen frequently enough to be intensely irritating. The fix was simple, but researching it was not.

Stop using the synaptics driver and start using libinput. For me this was as simple as running aptitude remove xserver-xorg-input-synaptics and rebooting.

Since your system may not be configured exactly as mine was, details follow so you can gain a better sense of what might be going on with your own system.

The Thinkpad t460p includes both a touchpad and a pointing stick. 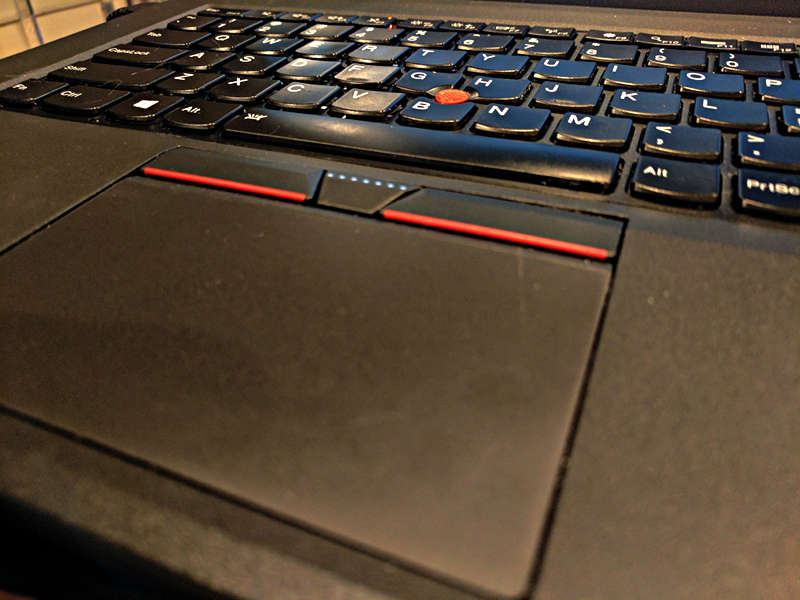 These show up as separate input devices under X11:

The libinput driver is working, though, and is in use by the pointer stick, as we can see by noting the libinput prefix on all the properties associated with id 13 (the TPPS/2 IBM TrackPoint from out initial xinput command).

One of commonly suggested approaches to address touchpad jumpiness while typing is the palm detection feature of the Synaptics driver. This can be configured either via synclient as described in the Arch Linux Wiki for Synaptics, via xinput set-prop, or by editing the xorg config in a file like /etc/X11/xorg.conf.d/50-synaptics.conf.

Enabling PalmDetect had no noticeable impact for me. I didn’t dig enough to determine if the feature was actually broken on my hardware, or if it just addresses a different problem. My palms don’t actually rest on the pad when I type, but the plastic of the laptop case flexes enough that the touchpad interprets it as input. It may be that PalmDetect is correctly detecting that no palm is resting on the trackpad and so allows the bad input though.

A second commonly suggested approach to erroneous touchpad input while typing is syndaemon. Syndaemon monitors xorg for keyboard activity (either by polling frequently or via the more efficient XRecord interface), and when activity is detected it briefly disables the touchpad by doing something roughly equivalent to xinput set-prop 12 "Device Enabled" 0. The Arch Wiki for Synaptics has advice on configuring syndaemon, or it can be added to your Gnome startup applications to run as your normal user on Gnome login.

Syndaemon also had no effect for me. It appears that in systems with multiple pointers, syndaemon only attempts to disable the first device. This issue is reported and confirmed in Ubuntu 1591699. In that bug report, the first pointing device was a “ghost” and could be disabled manually. In my case, there are legitimately two pointing devices present and I use them both, I don’t want to disable either of them. It appears that if you have two pointing devices and your touchpad doesn’t have the lowest xinput id, there is no way to configure syndaemon to supress input from the correct device.

Libinput is a library that handles input devices (both keyboard and pointer devices) for Wayland, but as we found in our drivers section above, libinput is installed by default and works for xorg systems as well. Libinput has a disable-while-typing feature built in and enabled by default.

I was able to activate libinput for my Synaptics touchpad simply by uninstalling the synaptics driver and rebooting. The libinput DWT feature began working immediately and my pointer became inactive while I was typing. Problem solved!

The synaptics driver also has features to divide the touchpad area into sections that trigger different buttons, and by default the right-half triggers a right-click when depressed. Libinput uses the whole touchpad for left-clicking, which is better behavior in my opinion. For right-clicks I use the hardware-button just above the trackpad.

It is allegedly possible to configure the synaptics driver to disable the right-click area but I never tried this myself as libinput has all the behaviors I want.

Note that the Thinkpad t460p’s touchpad acts as a hardware button, physically clicking when the pad is depressed. Both libinput howto’s above talk about how to enable the Tapping feature, which is not necessary for that hardware button to function. I suspect you only need the Tapping option if you want light taps to register as clicks, which seems unnecessary and undesirable for this hardware.